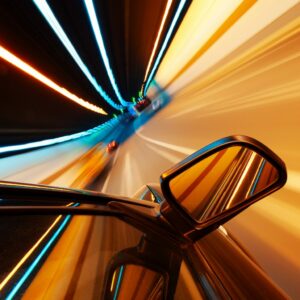 Most of the more than 30,000 traffic accident fatalities that occur in the U.S. each year are due to human error. Every driver is guilty of distracted driving at some time. When traveling at low speed, the driver has a bit more opportunity to pull back into their lane when the car tires leave the road and go on the soft shoulder. When the multi-ton vehicle is traveling at a higher speed, the consequences of the driver losing focus on the road and other motorists is often disastrous.

The Insurance Institute for Highway Safety (IIHS) reports that 28 percent of motor vehicle fatalities in 2014 were due to speed-related crashes. Each state has its own speed statute for drivers to operate their vehicles at a speed that is reasonable and prudent based on the weather and visibility conditions. The IIHS found that from 1993 to 2013, a 5 mph increase in the maximum speed limit resulted in an 8 percent increase in highway deaths. Various states have conducted studies on how raising or lowering speed limits potentially affect the number of auto accidents and highway fatalities. The U.S. Department of Transportation compiled data from several states.

What lawmakers must also factor into their decision is that higher travel speeds result in more forceful impacts when accidents occur. According to the IIHS, high-speed crashes subject vehicles to more structural stress than they can handle. The increase in crash energy is exponential. When the vehicle speed increases by 50 percent from 40 mph to 60 mph, the energy of that moving vehicle increase by 125 percent. Also, the occupant restraint systems cannot minimize the force enough to prevent severe injuries.

Studies consistently show that when highway speed limits increase highway fatalities increase. A Chicago auto accident lawyer can advise on the best course of action when an accident occurs.Traffic laws can save lives. When Illinois enacted a statewide ban on handheld cell phones while driving in 2014, traffic fatalities decreased by 23 percent the same year.