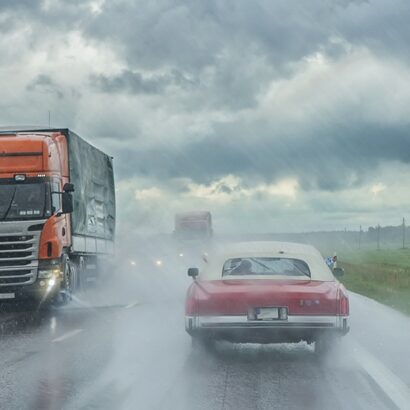 On the evening of July 23, 2015, Jill Buck was driving her Honda Pilot home on I-65 near West Lafayette in Tippecanoe County, Indiana. With her in the vehicle were her sons, Aidan and Branson. Shortly before midnight, the mother of five children entered a construction zone located near the SR 43 exit. Buck slowed her vehicle to comply with the posted construction zone speed limit. Behind her was a Toyota Yaris driven by Mikhail Stepanov, followed by a tanker truck fully loaded with cooking oil being transported from Lockport, Illinois by Ruslan Pankiv whose home base was located in Lake Zurich, Illinois.

When the accident occurred, Pankiv’s vehicle was traveling too closely to the Yaris. It was also traveling at an excessive rate of speed. These factors combined within the narrow corridor of the construction zone and the tanker truck impacted the Yaris, killing Stepanov instantly and seriously injuring his passenger. Following the initial impact, Pankiv’s tanker continued its forward momentum until it slammed into Buck’s vehicle. The impact caused Buck’s Pilot to spin out of control and into the median where it continued its forward movement until it slammed into the rear of another semi-trailer driven by Bogufalw Leja out of Elmwood Park, Illinois. At some point during the collision, the cooking oil within the tanker caught fire and quickly engulfed all three vehicles. It is believed that the fire was the cause of death for Buck, her sons, and for Pankiv.

Pankiv was driving for Illini State Trucking at the time of the accident. The company has a litany of safety violations and this was the tenth accident for the company in the past two years. One of those accidents resulted in the death of Sharon Woodcock in Dupo, St. Clair County in December 2013, and four other accidents resulted in serious injuries. Over the same period, Illini State Trucking’s drivers have been cited with 27 speeding tickets, and 26 citations for unsafe driving including citations for following too closely and performing improper lane changes; both of which were factors in this crash.

This past week, Buck’s husband, Paul, filed a wrongful death lawsuit against Illini State Trucking. The suit claims that Pankiv failed to maintain a safe distance between his vehicle and other vehicles on the road. It further claims that Pankiv was driving at an unreasonable and dangerous speed for conditions which made it impossible for him to maintain control over his vehicle as the vehicles entered the considerably slower speeds within the construction zone.

Additionally, Buck and his attorneys believe the company willfully ignored safety regulations set by the Federal Motor Carrier Safety Administration governing the amount of hours drivers may operate their vehicles during the week. To help determine this, they have requested Pankiv’s driving record and log books from Illini State Trucking. The company has refused to provide them even as they have publicly pledged cooperation with the investigation. With their lawsuit now filed, Buck’s lawyers can subpoena this information as they seek to prove that the company was continuing a pattern of willful negligence and flagrant violation of established safety regulations that could have been contributing factors to the crash. Of paramount importance, they are seeking to determine whether or not Pankiv had been personally cited and/or disciplined for violations of FMSCA regulations that are designed to protect both truck drivers and the drivers of passenger vehicles.

Paul Buck’s lawsuit comes as Congress is considering relaxing many of the restrictions and safety standards put in place to prevent these types of accidents from occurring. Among changes they are considering are provisions that would increase to 82 the number of hours drivers can operate their vehicles during an 8-day period; this would represent an increase of 12 hours per week. Furthermore, Congress is considering removing company safety ratings from the internet. This information shows a company’s driving record and history of past abuses. Should such a change take place, it will make it considerably more difficult for individuals like Paul Buck to prove that a company has an established pattern of willful negligence.

Equally disturbing are proposed changes that would reduce the amount of liability insurance trucking companies and private operators would be required to carry on their vehicle(s). Currently, FMCSA regulations stipulate that trucks must carry a minimum of $750,000 in liability coverage. Many truckers argue this is too high and that it is restricting growth in the industry at a time when there is a shortage of drivers.

Car accident attorneys in Chicago oppose these changes as they will create a perfect storm that will lead to more tragedies similar to the loss suffered by the Buck family. Exhausted truck drivers, less regulatory and public oversight, coupled with diminished insurance requirements will leave drivers of passenger vehicles exposed to an unreasonable level of risk as they travel down the road.