Car Crashes: Vehicles Voted Most Likely to Roll Over 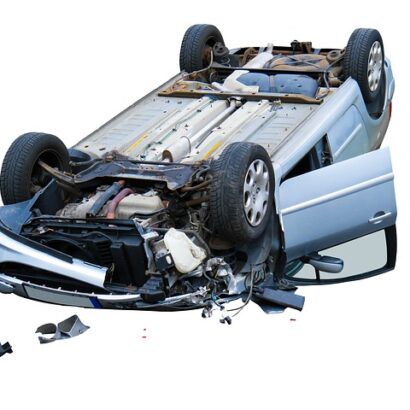 Light-weight pickup trucks, SUVs, and passenger vans have higher rollover rates than other vehicles on the road.

Taller vehicles like pickup trucks, SUVs, and passenger vans have a higher center of gravity that increases their risks for rollovers and car accident injuries. Although many advances in vehicle design and safety technology have been made, rollover accidents are still high with certain types of vehicles. According to the National Highway Traffic and Safety Administration (NHTSA), the following vehicles are rated with high rollover safety risks.

Topping the list for NHTSA high-risk rollover vehicles is the 2017 Nissan NV3500. It is classified as an SUV and one of the largest passenger cars on the market. In crash tests, the Nissan NV3500 scored a 2-star safety rating with a 30.6% chance of rollover in car crashes, the highest rollover rating of any truck or SUV currently on the market.

The 2017 Toyota 4Runner is rated as the large SUV most likely to roll over in a crash. NHTSA crash tests show a 24.6% chance of rollover due to the vehicle’s high center of gravity. This rating applies to the all-wheel model and the rear-wheel-drive model. The Toyota 4Runner is often seen by Chicago car accident lawyers who handle rollover accidents.

The Jeep Wrangler is a popular 4-wheel drive, off-road vehicle for many American drivers, but it is rated as a high-risk rollover vehicle. According to NHTSA crash tests, it has a rollover score of 27.9%. Jeep 4-wheel drive vehicles have a history of serious rollover car accident cases handled by auto accident attorneys.

With a hefty price tag of more than $70,000, the 2017 Cadillac Escalade has a high rollover risk of 22.9% due to its high center of gravity. Although the vehicle’s size, weight, and interior safety features provide protection when an accident occurs, its high rollover risk presents possibilities of severe head trauma, brain injuries, and fatalities in a crash.