Can This Technology Prevent Fatigue from Turning into Workplace Injuries? 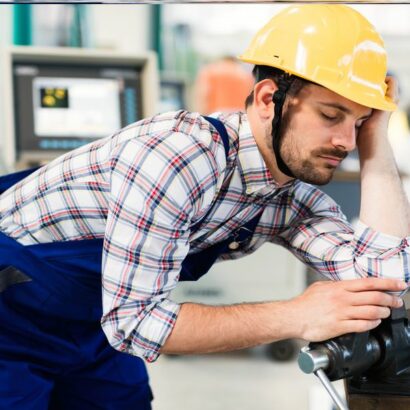 Lack of sleep and fatigue has become a big concern in today’s workplace. According to the National Safety Council, at least 13 percent of injuries can be attributed to worker fatigue. Lack of sleep and fatigue from long hours and exhaustion is a major cause of serious accidents and industries in the workplace, especially among shift workers who work night hours, rotating shifts, and irregular shifts.

National Safety Council reports show that 97 percent of workers have at least one workplace fatigue risk factor, and 80 percent of workers have at least two or more risk factors. Industrial workers, transportation workers, medical workers, and first responders like firemen and police officers face increased risks for workplace fatigue. A work injury lawyer sees a high rate of accidents and injuries in these fields.

Workplace fatigue affects millions of American workers each year. It results from a cumulative lack of sleep over an extended period of time. Workplace fatigue can create physical, as well as mental exhaustion that puts workers at high risk of serious on-the-job injuries. In most cases, it results from the following conditions:

All of these conditions can prevent workers from getting adequate amounts of restorative sleep. Experts suggest at least seven hours of quality sleep per night to function at best physical and mental capacity. However, the Centers for Disease Control and Prevention (CDC) reports that only two-thirds of people get seven hours of sleep regularly.

Each year, workplace fatigue is increasingly recognized as a problem that affects millions of workers. Data collected and published by the National Safety Council indicates that worker fatigue affects at least 43 percent of U.S. workers and costs employers more than $136 billion per year in lost productivity. That equates to a cost of approximately $3,100 per worker per year to deal with claims filed with work injury lawyers for workplace accidents due to worker fatigue.

To address problems with workplace fatigue, new technology referred to as Fatigue Identification Software has been produced to help with worker fatigue and sleep deprivation. Fatigue Identification Software consists of a variety of tech-based tools that help workplace employers and managers identify fatigue in workers before fatigue risks cause accidents and injuries. Two types of software applications are being implemented in the most affected industries:

AlertMeter software is designed to capture information related to a worker’s alertness during a normal work shift. Using a one-minute cognitive test taken on a tablet or smartphone, AlertMeter identifies a worker’s fatigue level. The test is usually taken before or during a shift, or before performing a critical work-related task.

AlertMeter delivers real-time fatigue data to workplace safety managers. The software permits continuous monitoring of alertness levels during a worker’s shift and gives safety managers an opportunity to take fatigued workers off the floor before accidents and injuries occur. AlertMeter is currently being used in manufacturing and mining industries with global success.

This software was developed specifically for shipping and transportation industries where work injury lawyers see high accident rates. The technology uses facial recognition software to detect signs of fatigued driving. When the technology detects levels of fatigue, the system alerts the driver and urges a break or rest period. It also sends real-time information to company management, so the driver can receive continuous monitoring for fatigue levels that may lead to a vehicle crash.

Caterpillar, a major manufacturer of construction equipment such as haulers, lifters, and loaders recently implemented a facial fatigue detection system to prevent fatigue-related accidents. Due to the large size and heavy weight of Caterpillar vehicles, accidents often cause limb amputations, crush injuries, damage to internal organs, and death. On some Caterpillar vehicles used in mining operations, tires are more than 12 feet tall and vehicles operate 24-hours a day. Due to dangerous conditions, a work injury lawyer sees fatal injuries in mining operations.

In Illinois, all workers are permitted to file workers’ compensation claims for work-related injuries, regardless of who’s at fault for the accident. Most claims are handled through a worker’s employer who sends information to the Illinois Workers’ Compensation Commission (IWCC), the primary state agency that handles workers’ comp claims.

If a workers’ compensation claim is denied, an Illinois work injury lawyer can file an appeal with IWCC to schedule a hearing for a case review.